St. Michael put its best foot forward Sunday and kicked St. John Vianney out of a share of the Valley Catholic Conference lead, 13-0, before 1,725 fans at Atwood Stadium.

Unable to mount an offense worthy of a championship-seeking team, the Mikes relied on breaks, a good defensive line and the fine toe of Vytas Virskus to capture their fifth victory in seven starts.


Virskus became the first Flint high school player to kick two field goals in one game since Northern's Frank Mitoraj booted a pair in the 1929 Thanksgiving Day game. He connected from 30 yards in the second quarter and 35 yards in the final quarter after missing a 32-yarder in the last period.

Dan Aube got the Mike's touchdown on a 14-yard pass from quarterback Denny Hickman with 6:24 to play in the second quarter and Virskus converted from placement.


St. Michael emerged with a one-third share of the VCC lead with Holy Redeemer and Saginaw SS Peter & Paul at 4-1. It's possible for coach Pat Fields' club to get an outright title because it meets both rivals in the next two weeks.


But the Warriors will need a much better offense than they showed on Sunday. They gained only 51 yards rushing and 19 passing, averaging 1.4 yards on 50 plays. Their top runner, Tom Sherwood, required 12 runs to gain 23 yards and No. 2 gainer, Ralph Proctor, needed 14 runs to make 20 yards. St. Michael's only first downs (three) came in the last 30:24 via major penalties against St. John.

However, that offense looked like an avalanche compared to St. John's. The Hornets lost 14 yards rushing and made 39 passing yards for an afternoon net of 25.


St. John quarterback Bob Peters looked at onrushing St. Michael linemen all afternoon and was squashed for 87 yards in losses in 11 tries, mostly passes, with the ball. This defense, coupled with Virskus' toe, enabled the Mikes to wobble through.


They got a weird break when St. John's Mark Christenson, back to block on a punt runback, didn't see the ball. It struck him and Carl Armor recovered on the Hornet's 49. Aided by a personal foul penalty against St. John, the Warriors got to the 19 in four plays. Two runs netted nothing, but Hickman hit on two straight passes -- his lone completions of the day -- for the remaining yardage. Sherwood caught a five-yarder, then Hickman found Aube at the five and he drilled across.


The Hornets were pinned down after the kickoff and Hickman's 10-yard punt return put the ball on St. John's 29. Another 15-yard penalty against the loser helped the Mikes, but they gained only four yards on their own. This time they settled for Virskus' 30-yard three-pointer.


St. Michael was caught with ten men on the field late in the game but Dick Totten rushed into action just in time to intercept a deflected Peters pass on the St. John's 19. The Mikes advanced only a yard before Virskus again toed a three-pointer with 31 seconds to play.


The best St. John threat died on the Mike's 25 after Dan Cafmeyer - his team's best runner with 52 yards in 11 tries - had contributed a 24-yard run to that point. St. John also reached the 31,33, and 39. St. Michael's non-scoring threat reached the 15 before Virskus missed his field goal try.

The Final Football Game of Our Season

These are the pages in the program. The advertisements will bring back some memories.

Click on a page to see a larger size. 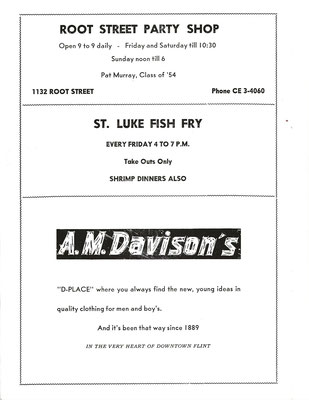 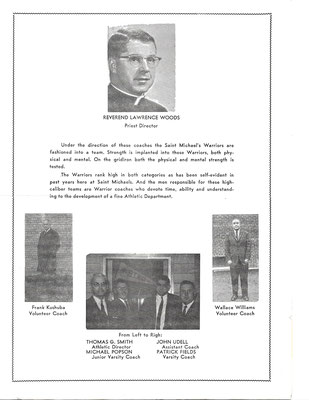 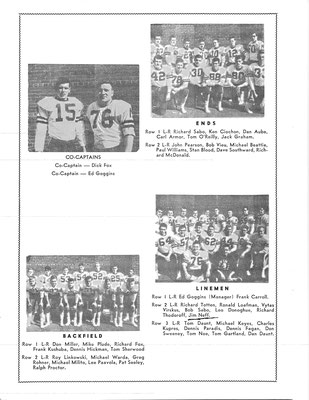 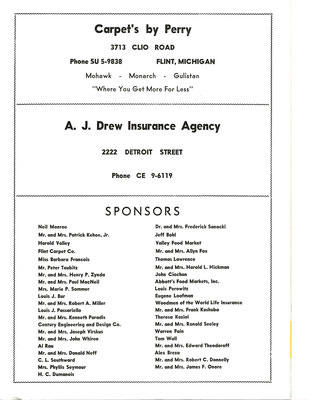 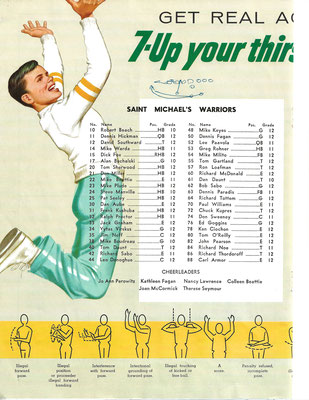 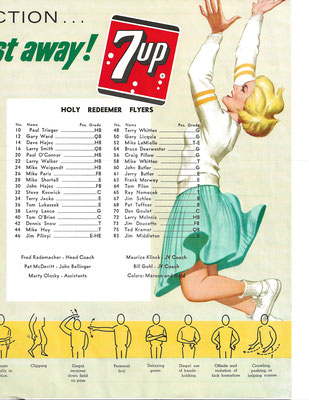 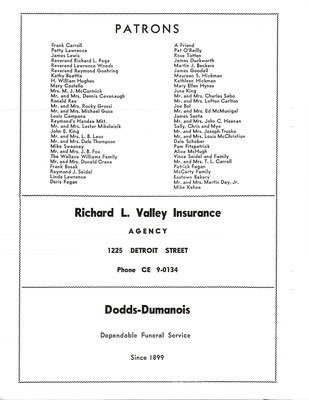 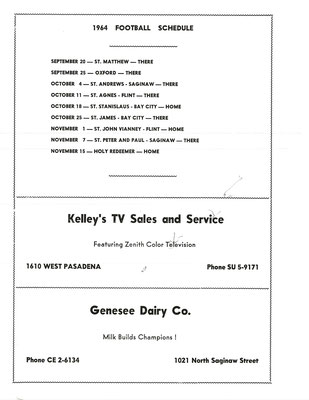 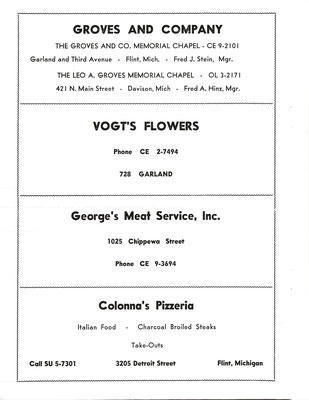 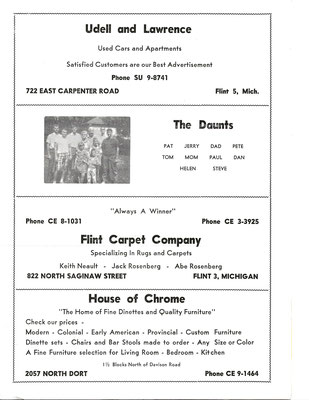 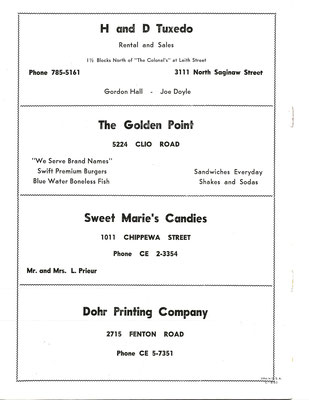 Thanks to Dick Knight, Class of 1958, for providing this official program.